In the last 6 days (Friday-Wednesday) the hikers have enjoyed mostly fantastic weather. They've taken it pretty easy, fishing and swimming. Birk has shown further evidence of his courage and balance as they have gone over long swaying suspension bridges.

Yesterday afternoon they arrived at Ritsem where they ate and slept well. Magnus has started working so now Håkan and Birk are alone again and today they began the trek to Abisko which is the last depot before Treriksröset. 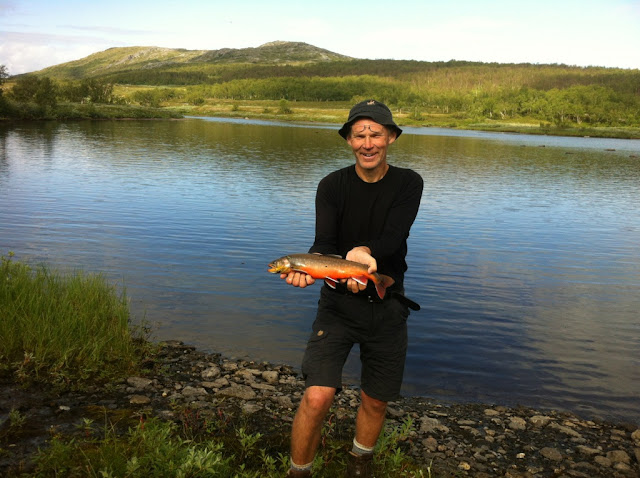 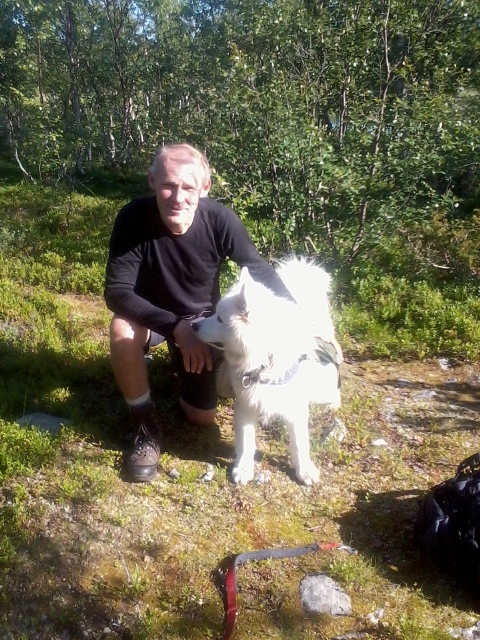 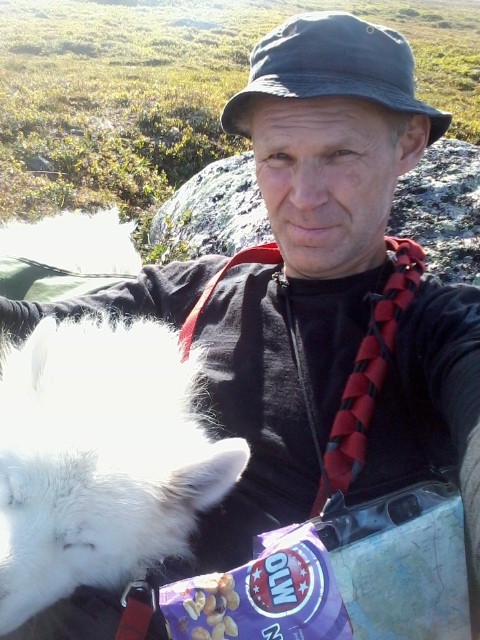 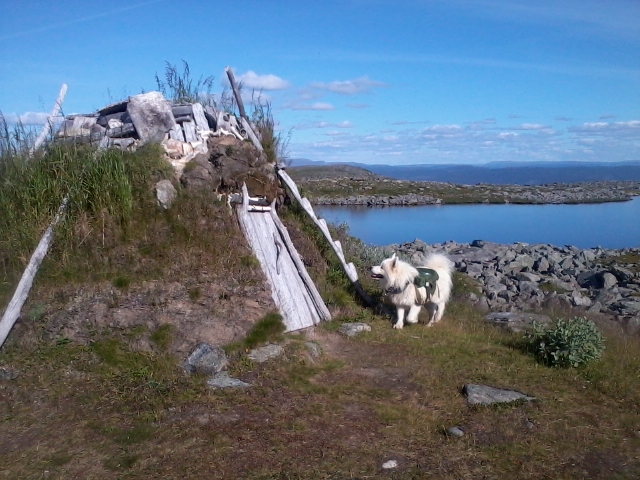 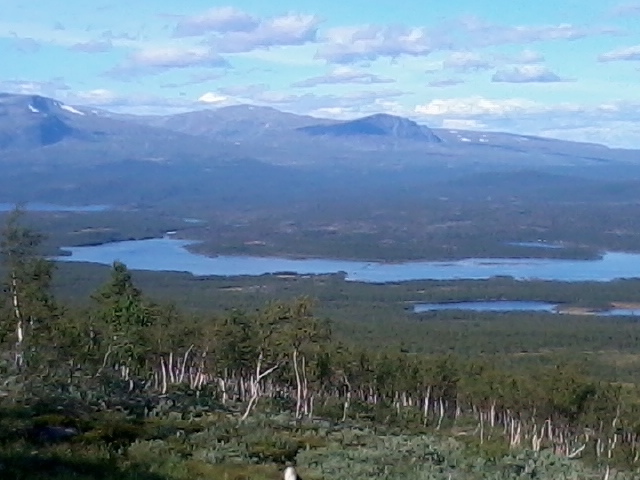 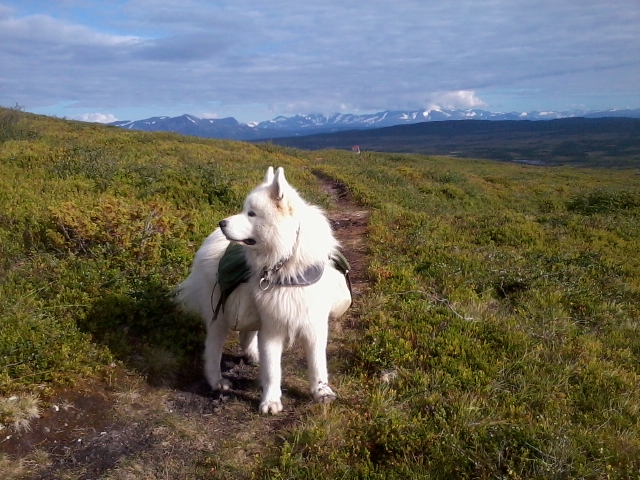 Just as usual the hikers woke up, like early birds, at 8am, after a cold night and were greeted by a clear blue sky. The fine weather persisted throughout the day and for the sixth consecutive day Håkan enjoyed being able to walk in shorts without being bothered by neither mosquitoes, gnats or other insects and the temperature was pleasant (around 20-25 degrees).

At 11 o'clock, they reached Adolfström. There, they ate breakfast and waited for the post that would come with a new package of dog food and freeze dried food to Håkan, but ouch - there was no package and the next mail delivery would not come until Wednesday. Would they be forced to stay in Adolfström until Wednesday?

After a nice shower Håkan happened to meet Tom Wiklund from Arjeplog. To Håkans delight he had both a map and dog food, with which he sponsored Håkan. After a visit to the shop the gasket was full again and the hikers could continue. The clock was now just after 16 so todays stage became relatively short. 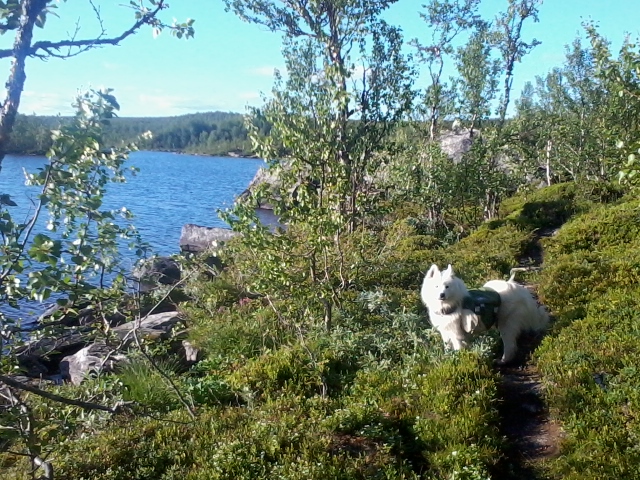 Continued good hiking weather and a lighter backpack makes life easy for Håkan. Today's stage on great trails and in the absence of mosquitoes, gnats and brakes has been very nice . Yesterday's stage became a total of 38km. After I had spoken to Håkan, he found out that the place which he had planned to put up the tent was inappropriate in the strong wind. After another 3 km, they found a good spot in the lee of a small hill and with water nearby.

Birk has learned that he almost every time get a little taste of his master as the food is running out, but yesterday as Håkan gave him 4 hg minced meat he didn't think it was his food. Håkan had to say Go ahead several times before he dared to eat, but then he licked every last bit with pleasure, and could even eat the last of Håkan's potato salad.

Birk has become really tough and does not hesitate at all as he shall go over swaying bridges with foaming rapids below, he now relies entirely on Håkan and he is sure that Håkan will not ask him to do something that might be dangerous. 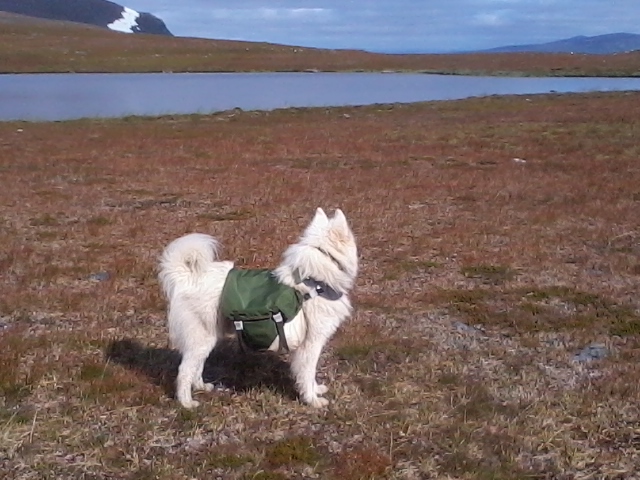 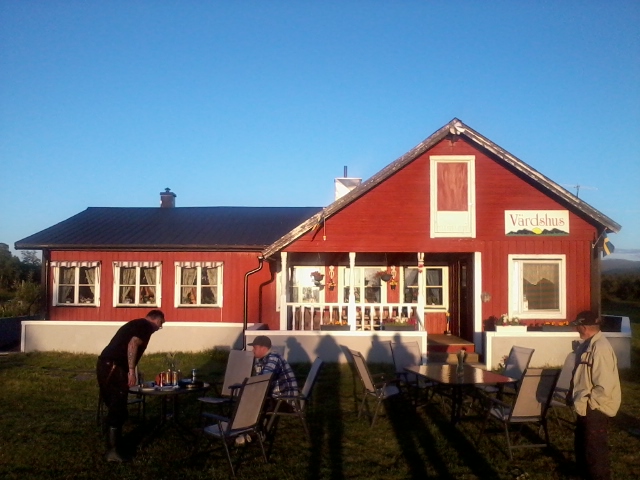 After an early morning, they broke camp already shortly after 07 pm, the start of todays hiking was fairly difficult and less enjoyable north of Tjulträsket. The trail went on footbridges which were surrounded by man's height vegetation. Birk went first and the only thing impling that he was somewhere there in front of Håkan was a gently swaying in the vegetation. All of a sudden there was a cabin in the wilderness, at Rödingviken. A sign explained that aready in 1923 a phone was installed here  which made the house a meeting point of contact with the outside world.
The travelers arrived in Ammarnäs sometime before 14. In Ammarnäs commercial Håkan received a package, which I had sent, containing a lighter sleeping bag and a lighter sleeping pad. The old sleeping bag and sleeping pad are now on there way home by mail and Håkan is enjoying the fact that his bacpack now is about 4 kg lighter. Now we just keep our fingers crossed that the lighter sleeping bag will keep its promises regarding the ability to keep the warmth.

In Ammarnäs  Håkan was told he had been very lucky with the weather. It was the hottest day so far this summer in Ammarnäs and probably the only day when shorts were suitable as clothing for a hiker. 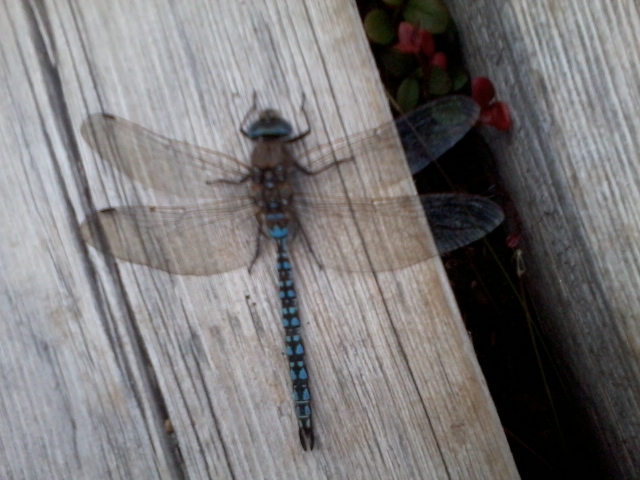 Imagine 7hg can matters so much. When Håkan had eaten food so that the gasket was 7hg lighter the backpack suddenly didn't feel at all heavy anymore. Perhaps the beautiful mountain landscape, the fine trail and the nice weather also made some difference - today's stage has felt outrageously easy. The old man is slowly getting into shape :)) 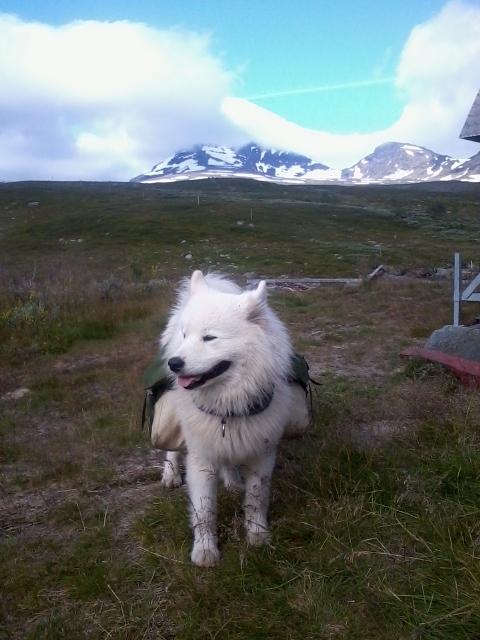 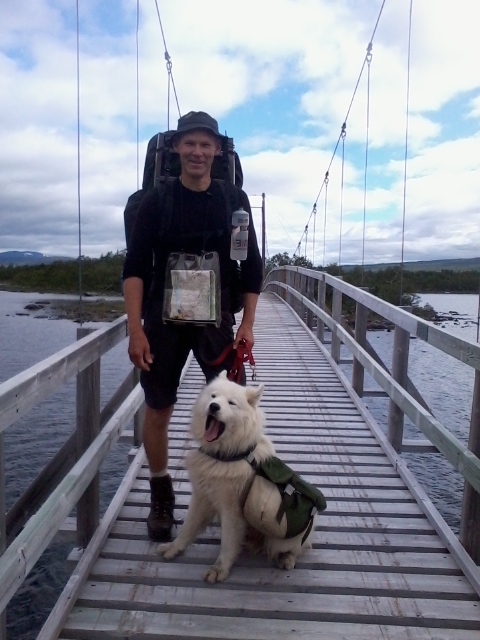 
Stunning views and glorious weather, today the walk was easy, except that Håkan after filling up his foodsupply in Tärnaby wondered if he had by mistake packed something that he shouldn't. The backpack was so heavy after he filled up with about 4 kg, but after a few km, it felt normal again.

Today's stage has been a real pleasure and well worth fighting the mosquito, wet bogs and wet weather. As I spoke to Håkan today he lay on his back on the mountain and just enjoyed himself. 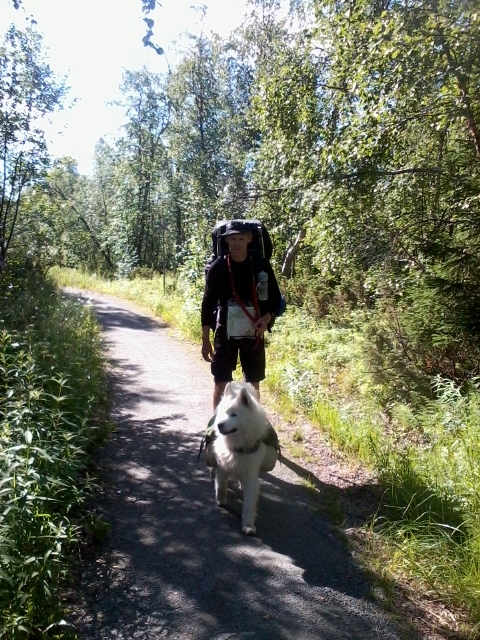 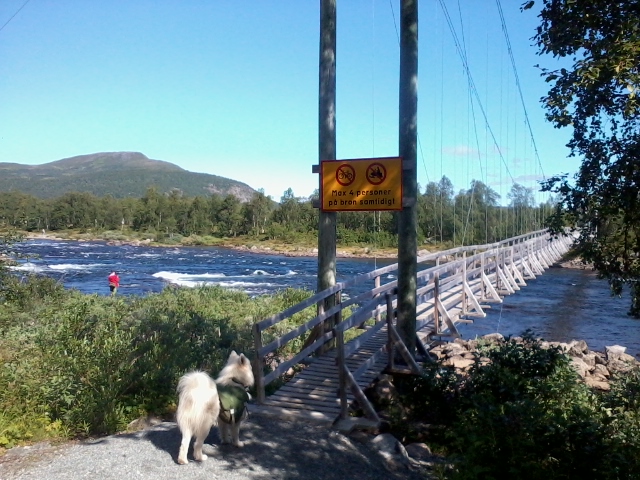 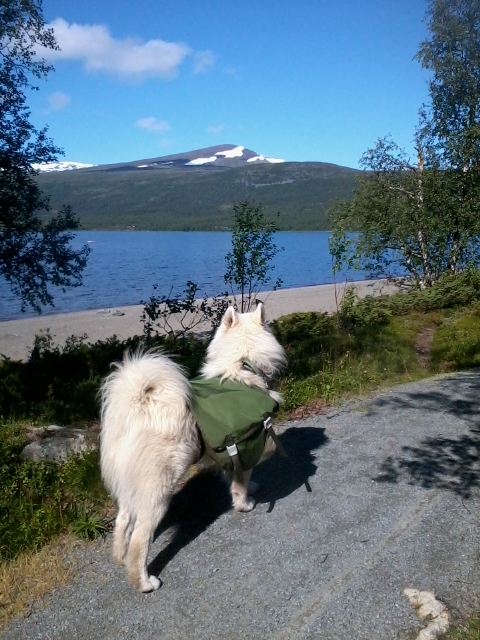 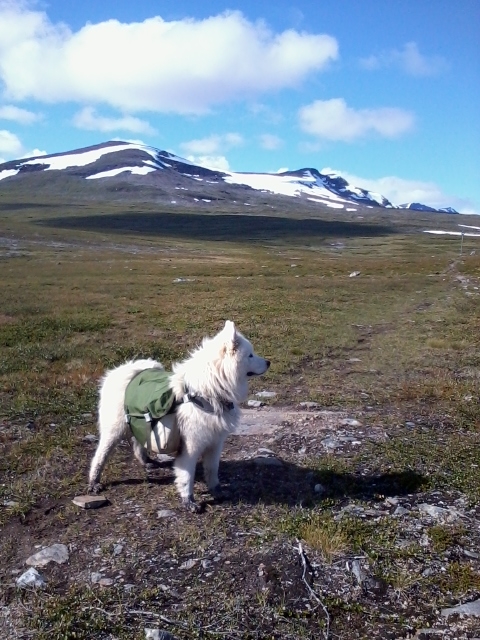 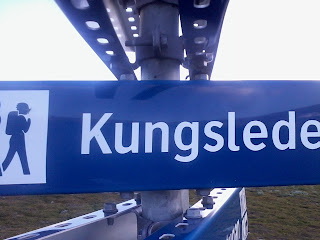